I am part of a very interesting experience learning more about Culture-Responsive-Sustaining-Humanizing aspects of being a teacher.  If someone was to ask me, “what have you learned so far?”  My answer, “I was doing this 29 years ago when I was 23 and people were blown away.  And then, the last several years at Dublin High School, it was “beaten” in me that my “job” was to teach music.”  October 5, 2017 at Dublin High School, I was accused of pushing a social agenda.  Now, I didn’t take students to a “protest march” like other colleagues did, but I was pushing a social agenda?  In February 2017, I didn’t stand-up at a district-wide teacher work day IN FRONT OF DHS STUDENTS as well as teachers / administrators and proclaimed life was better prior to January 20, 2017 – WAS APPLAUDED by many teachers AND STUDENTS, but I was pushing a social agenda.  Giving students life stories.  Sharing motivational videos and asking what the students did learn / how could the students apply those videos to being a better person / better band.  Probably not the social agenda that “fit” that part of California

What I was doing twenty-nine years ago was caring more about the students than making music.  I was innovative.  I read CHICKEN SOUP stories to the students.  Many of them loved it. I would host lunchtime meetings about life talks.  How we needed to be better people.  I listened to their stories.  I truly believed before I learned the “Maxwell” quote:  BEFORE YOU ASK FOR A HAND, YOU NEED TO TOUCH A HEART!  Well, Cultural-Responsive-Sustaining-Humanizing is getting me back to what was beaten out of me; that part of the program = GREAT.  Students first; subject second.

One of the exercises was to read the following Muhammad Ali speech:

“I believe in Allah and in peace.  I don’t try to move into white neighborhoods.  I don’t want to marry a white woman.  I was baptized when I was twelve, but I didn’t know what I was doing.  I’m not a Christian any more.  I know where I’m going, and I know the truth, and I don’t have to be what you want me to be. I’m free to be what I want.

Black Muslims is a press word.  The real name is Islam.  That means peace, Islam is a religion and there are seven hundred and fifty million people all over the world who believe in it, and I’m one of them.  I ain’t no Christian.  I can’t be when I see all the colored people fighting for forced integration get blowed up.  They get hit by stones and chewed by dogs and they blow up a Negro church and don’t find the killers…I’m the heavyweight champion, but right now there are neighborhoods that I can’t move into. I know how to dodge boobytraps and dogs.  I dodge them by staying in my own neighborhood.  I’m no troublemaker…

I’m a good boy. I never have done anything wrong.  I have never been to jail.  I have never been in court.  I don’t join any integration marches. I don’t pay any attention to all those white women who wink at me.  I don’t carry signs…A rooster crows only when it sees the light.  Put him the dark and he’ll never crow.  I have seen the light and I’m crowing.”

Let his words sink in.  That speech was in February 1964 – FIFTY-FOUR YEARS AGO!!  Yet, there are parts of that speech, of course, we can hear someone saying today, February 8, 2018.  And yes, we can really hear an African-American giving the same speech following a victory!  Yet, I wonder if he (in this case it is “he” an African-American male) would face any backlash from his thoughts?  Islam – peace?  Not supporting integration marches?  Doesn’t believe in interracial marriages?  Infer that white people cannot be trusted?

Part of the exercise was could we identify with Ali’s frustration(s)?  The leader of the session wanted someone to share.  Very awkward.  Someone would have to really be willing to “put himself / herself out there.”  Well, what the heck!  I will speak-up.

I have written about this topic in prior blogs articles.  Yet, since I wrote the I AM A MARRANO article, we have heard terrible stories about men abusing women and the creation of the “me too” movement.  So, now there is a greater “challenge” of being a white / heterosexual male / happily married to the same women since March 30, 1991 / father / reasonable conservative.  I do have a similar feeling of how I read the excerpts of the Ali speech.

As Ali was proud of his faith (Islam), I am certainly proud of being a believer in Christ.  What is different in 1964 was he was controversial in his belief in Islam, while in 2018 Ali would be heralded as a “champion” for the courage to state, “I believe in Allah.”  If I stand-up at work or among friends and “boast” / be all “braggadocio” about being a Christian I am then:  ANTI-WOMEN’S RIGHTS; ANTI-GAY; ANTI ANY LIBERAL CAUSE; PRO-TRUMP (didn’t vote for Trump; wrote my name in).

Being happily married to the same women can also now seem to be “dated.”  Not totally cool in today’s world.  Even being a daddy of a daughter, me wanting a public school to host a daddy-daughter dance is now being challenged as being insensitive.  Oppose to simply wanting to have the experience of being with my daughter (when she was a little girl) and other dads and enjoy that incredible relationship.  Great to be able to talk to other men about what it’s like to be the dad of a daughter.  Share ideas. 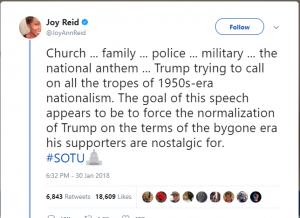 Then, I read this tweet from Joy Reid.  Joy is an African-American woman commentator on MSNBC.  Except for the Trump part of her tweet and “celebrate” the 1950s, I believe – STRONGLY BELIEVE – in supporting church…family…police…military…the national anthem… My perception is Joy believes those things are part of a bygone era.  While I believe those parts of our culture give us a foundation / protect us from losing our constitution – the fabric of our nation.

Church (in the broadest sense of the world) gives people a sense of community.  Coming together to share principles / virtues / be better people.

Family.  Sure.  I get it.  Joy is suggesting that family can be any “shape” or “size.”  I do believe a child does better with two parents and one of the two parents being ready to go to the school meetings / doctor appointments / etc.  I missed out not having a father.  By being a father and a husband, I see what I missed by not having a father.  In today’s world, we are seeing more and more single-mothers.  We are seeing more and more folks argue that the role of the father is exaggerated / overrated.  We will disagree.  A father is as critical as a mother in raising a child.

Police.  Wow.  Really?  Police are now seen as something that is a negative or throw back to a bygone era? We need police.  We are a self-governing country.  There is so much talk right now that President Trump is undermining the FBI, even the DOJ.  Sure feels like Joy is undermining the important role our police play in our country.  I love our police.  We need to support our police.  And, when there is a rotten police officer, we need to do all we can to assure that officer is never working for the public sector again.  NEVER!

Military.  Again, WOW!!  The military gives all of us the freedom.  We enjoy freedoms many other nations condemn.  In our nation, Gays can be married.  In other nations, they are persecuted.  In our nation, women have the right to vote.  In other nations, women don’t even have the right for an education.  Do you not understand that one of the reasons we can enjoy freedoms is because of our AWESOME / UNDERAPPRECIATED MILITARY?  For gosh sake, we have a teacher / council member saying disgusting things about our military and his students DEFENDING him!!  In our nation, that man can say those crap comments while in other nations, he may have been arrested and shot.  Irony – the military helps defend SALCIDO’S right to be STUPID!  I wonder how happy Joy was when SALCIDO said what he said about the military?  On February 7, 2018, I did a “search” to see if Joy condemned SALCIDO for his comments.  No.  Could not find her condemnation of SALCIDO’S comments.

The National Anthem.  We cannot stand-up for the national anthem without being given the label of being “jingoistic.”  We are jingoistic because we stand for the NATIONAL ANTHEM?  We “trigger” others by singing the National Anthem because those words are so “over the top.”

So, do I identify with the young Muhammad Ali in the sense of not fitting in?  That’s how I read the excerpts of the speech.  Sure.  I do feel that I am not fitting anymore.  I do feel that my belief that others own their feelings is a by-gone era.  According to many people, I am supposed to be responsible for how others feel from my speech / my thoughts.  I need to be a mind reader.  It’s an interesting way to get “us” not to talk.  And here…get “us” not to talk…is the one thing that worries me about the CULTURAL CIVIL WAR we are experiencing.  Once the left starts to break apart our RIGHTS that make us THE UNITED STATES OF AMERICA, then we are crossing a line that will “fundamentally” change America.  Sure.  We have had  cultural revolutions.  We have needed some of those to improve our nation.  Yet, when “free speech” is free when you believe in Joy’s world or even Trump’s world, then we are losing the freedom our nation has enJOYed.

“Paul, you got to catch up with the rest of us.”  Really?  Read Ali’s speech.  I bet they were saying the same things about him.  When we are “bold” enough to live by our principles and encourage others to live by their principles, we are looked at funny.  “How can you, Paul, not see that our principles are far advanced compared to your “dated” beliefs? You must be a sad man, Paul.”  Well, my dated beliefs have led to a fantastic marriage; two amazing children; great daughter-in-law; and fantastic career.

Please… allow all of us to lead our lives as we see fit and when you ask us to respect your choices as “the way” to live your lives, I would ask the same in return, Joy.  There is some irony that her name is Joy because, she has a certain idea of what joy should be for all of us and when we don’t see it Joy’s way, well, we don’t have joy.  When we don’t see life Trump’s way, we don’t have joy.  How do you get joy?  Answer:  THAT IS YOUR CHOICE…for now.  OWN YOUR CHOICE.