Where was Cindy Lou Who’s Dad?  Did y’all ask the same question?  No?!

You didn’t?  Well, I guess I am becoming the “minority” of folks who are sensitive to “treat men as if they are not needed and stupid.”

Now, I know the new movie about MR. GRINCH is just a “simple” adaptation of the classic 1966 TV show. ONE OF MY FAVORITE CHRISTMAS TV SHOWS.  I was born in 1966.  My favorite all-time Christmas TV show is CHARLIE BROWN CHRISTMAS.  Hands down.  My favorite.  Followed in a close second is THE GRINCH WHO STOLE CHRISTMAS and if I had to choose a third… RUDOLPH.

Our daughter’s favorite Christmas TV show is THE GRINCH WHO STOLE CHRISTMAS.  So, we “had” to go see the movie, THE GRINCH. 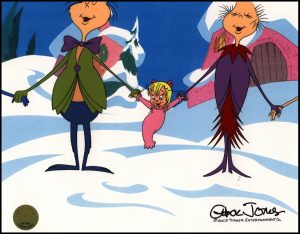 This generation’s THE GRINCH has a fatherless Cindy Lou Who and by “you” asking, “Where is Cindy Lou Who’s dad” is actually a GOOD THING.  You recognized the MISSING father!  However, there will be others who don’t ask the question because he / she doesn’t recognize the father is MISSING and yes … not recognizing the father is missing is a “bad” thing.  “Bad” DOES NOT MEAN … DOES NOT MEAN… you are “bad.”  No.  It doesn’t.

Yes.  I am bothered there was no positive dad figure in the movie.   SPOILER ALERT.  Mr. Grinch comes in at the end of the movie with his tie on (which is another interesting social part of the movie:  a “man” wearing a tie to Christmas dinner?!  Days gone by) and he cuts the turkey.  Seems a bit patriarchal (sarcasm).  A shout out to the “old-fashioned days.”

We do hear that Cindy Lou Who’s gift (SPOILER ALERT) isn’t material.  No.  The gift:  she doesn’t want her mom to be alone / lonely.  A very noble gift.  We also hear

other gifts: “love” and “kindness.”  Good.  Those are also noble gifts.  Love the idea that material items are not “the” gifts.

But, why not have the gift be: I want a dad?  That is a good gift. Or … It was a good gift.  I would have loved to have had Cindy Lou Who say, “I want a dad.”  I am sure someone reading this (one of the ten of you (smile) will have an answer that MR. GRINCH is the dad.

My goodness… not being funny … if Mr. Grinch is the dad, isn’t that a little negative?  Why does MR. GRINCH have to be male?  I mean if we are going to go all-in changing our society, let’s make the 21st century grinch MS. GRINCH?  (that last part was sarcasm… I would be PISSED-OFF if the “social-constructionists” / “post-modernists” made MR. GRINCH a female character… PISSED OFF… when a cause goes too far … PISSED OFF).

When I sat down to write this blog entry, I did go on GOOGLE and searched, “Cindy Lou Who’s dad.”  I came up with the YEAR 2000 live action / Jim Carrey movie and there he was… and I think I remember him being again the quirky / dorky dad figure we are seeing more and more.  You know… FATHER KNOWS LESS, oppose to the old TV show:  FATHER KNOWS BEST.

And, I found a picture of a mother / father holding and swinging Cindy Lou by her arms. 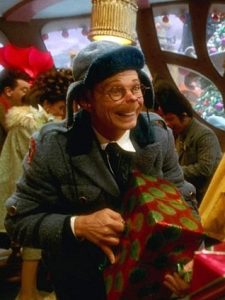 Other than that … can’t really see the father in the story.

So, I go back to WHERE IS CINDY LOU WHO’S FATHER?  An unfortunate question we seem to be asking more and more.

When you (adult men or adult women) see movies such as THE GRINCH or this new stupid commercial that features an adult male acting like a stupid boy (the adult male is seen sitting in a grocery cart playing with the groceries and at the end of the STUPID commercial, the same adult male is in overalls that are too small for him, sitting on the floor at a daycare facility drinking from a sippy-cup… YOU WOULD NEVER see an adult woman in ponytails in a little dress too small for her, wearing  patent leather shoes, drinking from a sippy cup… NEVER) tell your children, “dad is important” / “men are important” / “men are as smart as women.”  We need to speak-up.  It is getting ridiculous to see these weak portrayals of men.  SERIOUSLY.  It is.

How do these portrayals help?  We don’t like it when we see females portrayed in disrespectable roles; yet, it is okay for men?!  Of course, it is not okay, but revenge or vengeance or people with power who have “daddy-issues” seem to be getting a pass.

Nope.  As a father of a daughter and son … no pass from me.  I will bring up the topic:  MEN ARE BEING ATTACKED!  You are doing a great disservice to our society by treating men this way… as you do when you treat women in a similar way.

It’s just a cartoon… Yep.  What a better way to promote a message – any message.  It’s simple and … we can take our entire family to see the cartoon.  Hmmm…

Again, go see MR. GRINCH and then accept the responsibility to say something positive about dads and men-in-general.  Fill the void that the makers of this movie created.