Today was the fifth consecutive day of NOT being on Facebook.  I am going to guess what I missed since September 30 afternoon:

Now, I could have missed a couple of things, but I think you get the picture / the point.  I need to step away.  I tend to lean to the libertarian form of government.  Maybe a part of the constitutional party.  One “party” I don’t want to be a part of?  THE EMOTIONAL PARTY!  Damn.

When you are a public school teacher, you are expected to be a certain person.  When you are not like or not like-minded, you are shunned.  So, here I go.

Well, here is me:

Much of what I list about me leads others to label me as a “narrow-minded white man” and has led to losing friends / hurting relationships.  As of October 5, 2020, I am not a “typical” public school teacher in California.

So, when I was reading all the comments on Facebook about the debate, that did it for me and I am so grateful to have made the decision to take a break.

To see all the CRAP on the news about “wish president Trump would die” or “thank COVID for getting to the president,” (paraphrased) I can now IMAGINE what was on Facebook and NOT having to see it!  Read it.  I encourage all of you to please take some time off Facebook.  It will do your soul wonders.

Today (September 30, 2020) – our son / one of my heroes asked me to do something that I can do.  His request comes out of love … I will respond to his request.  “Dad, I think you should get off Facebook for a while?”

So, beginning October 1, I will be off Facebook for who knows how long …

So here is my “manifesto.”

When there are people who refuse to acknowledge bad behavior from their party leaders…  Meaning … if the leader is a fellow “BLANKEN-PARTY,” his actions are acceptable, while in the opponent’s “FILLIN-PARTY” commit the same actions, those same actions are deemed wrong — I just need to step away.

At last night’s debate, there were plenty of gaffs.  Trump told some humdingers and so did Biden.

You (anti-Trump folks) accuse the President of being misogynistic. Saying dreadful things about women (TRUE – BTW! – He said those things). Mistreats women.  And yet, the same people who criticize the President, look the other way with Senator Harris and her relationship with Willie Brown?  (even your favorite “SNOPES” says there is some “truth” in that story) …  Please…

Folks … when you cannot have the ability to look at your candidate and say, “What are you doing?  What did you just say?”  Your devotion to your leader has gone too far for me.

We keep hearing the “cult” word come out.  Well, there is validity. a system of religious veneration and devotion directed toward a particular figure or object. I would encourage you to do all you can to keep your minds open.

Do all you can to show:  COURAGE. TEMPERANCE. JUSTICE. WISDOM.

These are the four virtues of STOICISM.  They are the most essential values in Stoic philosophy. “If, at some point in your life,” Marcus Aurelius wrote, “you should come across anything better than justice, truth, self-control, courage—it must be an extraordinary thing indeed.” That was almost twenty centuries ago. We have discovered a lot of things since then—automobiles, the Internet, cures for diseases that were previously a death sentence—but have we found anything better?

…than being brave
…than moderation and sobriety
…than doing what’s right
…than truth and understanding?

What finally got me to say, I am done for a while with FACEBOOK… is this post from our possible future president… says, :  There’s no other way to put it, the President of the United States refused to disavow white supremacists on the debate stage last night. 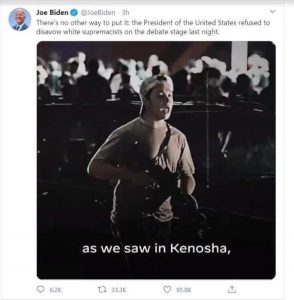 That comment has nothing to do with this young man!  And yet, FACEBOOK allows this to stay posted?

He has now been given that label / branded that label by our possible future president.

Mr. Trump & Mr. Biden – you disappointed many people last night (September 30, 2020) at that first debate.  Not your “followers” / your “believers.”  You will NEVER disappoint those folks!  Like Jim Jones’ followers on November 18, 1978 (I believe Vice President Biden was in his first term as senator)  – your followers have drunk the kool-aid.  There are plenty of others breaking bread / drinking wine, gentlemen!

We need your contribution.  Thank you.
https://bit.ly/3g7Rn1p