On April 14th I decided to take “my” flag for a walk.  I have done this several times and the response to me carrying the flag is so flippin’ cool! 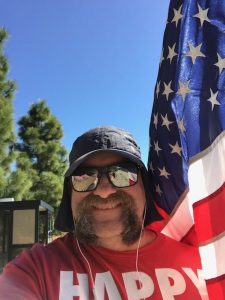 I must admit.  I get a kick out of the response to me simply carrying our American flag.

Now, I know I am the “crazy” looking dude attempting to make a statement.  I know there are those folks who are put-off by my “jingoism” (extreme patriotism, especially in the form of aggressive or warlike foreign policy).  I don’t mean to be “jingoistic” at all.  Yet, on this day, APRIL 14, 2018, it was the day following the bombing of three targets in Syria.  The bombing is IN RESPONSE to Syria gassing its people.  And, yes, there is evidence they did this and people can choose to accept or reject the evidence.   Also, the bombing was not just done by the United States of America, it was also done by England and France.  So, instead of being patriotic (which is why I occasionally carry the flag), I was INDEED carrying the flag in support of THE MEN AND WOMEN who follow orders and accomplish their missions.

I walk down a street named FOOTHILLS.   A six lane… SIX LANE … street.  People honking!  Thumbs-up.  Waving at me.

Then, I turn right and begin to walk in the neighborhoods off this SIX LANE street.  A guy, AS HE IS DRIVING BY THE WAY, takes a picture of me with his cell phone.  Of course, I stop and pose for him.

A couple of blocks from there, an older gentleman, maybe in his seventies, slows down in his car.  Car slows down to match the pace of my walk.  I take off my headphones.  He rolls down the car  window.  “Are you a veteran?”

“Nope.  Our son is _________ (yes, I tell the older-gentlemen rank and branch of military; however, at the request of my son / I don’t post either).  My grandfather was the Executive Officer of the USS INDIANAPOLIS when it was sunk in 1945.  I love my son and grandfather and I love our nation.”

Our flag is a symbol.  People respond to this symbol (USA FLAG) as they see our nation.  Yes.  When I see our flag degraded – torn up; spit on; burned – it hurts, because I see those people are tearing us up; spitting on us; and, yes, burning us.  It is sad to see all the negatives on our media and yet, I cannot prove it, IT IS A MINORITY OF PEOPLE!  Most people love our

nation.  However, seeing terrible / negative behavior gets the attention.  “If it bleeds – it leads.”

On April 14, 2018, there were 24 people in Sacramento … TWENTY-FOUR PEOPLE … protesting the bombing of Syria.  And they get two-minutes on a local newscast.  THANK GOD the news reporter had the JOURNALISM SENSE to inform us – that few viewers caught, “Two-weeks ago, at the Stephon Clark protests, many of these same people were seen protesting at those protests.”  There is a coordinated attempt to take down our country.  Not to be paranoid, but when one sees posters with the same little website address on the bottom of their professionally made signs at a Stephon Clark protest and then two weeks later the same little website (which I will not share; they get plenty of attention – which is what they need) on similar protest signs, yes – there is a coordinated attempt to change this nation.  These are the “professional-protesters.”

So, I encourage all of you… once in while, show you are proud / grateful / thankful to be a citizen of the LAND OF THE FREE – HOME OF THE BRAVE and take our USA flag out for a walk.  By seeing you simply carrying our USA FLAG, you will give people hope that for every “professional-protest-sign” held-up by twenty-four people in Sacramento, there is a RED / WHITE / BLUE flag to answer their black writing / yellow signs.  What makes our nation the greatest nation in the world, for now?  Both symbols (USA FLAG and “professionally-made-protest-signs”) are legal.  We need to keep it that way.

1 thought on “Took Our Flag for a Walk”